Promenade of Charlotte awarded a $10,000 grant to support Freedom School Partners (FSP) for their six-week, summer literacy program, Freedom School, with much needed technology and literacy supplies. The gifted items include: 20 Amazon Fire Tablets with cases, screen protectors and chargers; 10 mobile libraries with 80 books, easily accessible to move to and from classrooms and sites; two desks; five,10-packs of folding chairs; six large tables; two office chairs; and four rolling shelving units to use at FSP’s satellite office and storage facility.

Promenade is a non-profit that has been providing dance, etiquette and life skills classes for middle and high school students in Charlotte for 65 years.

Executive Director of Promenade of Charlotte, Elizabeth Jones, says, “Freedom School Partners was chosen for this grant because they met our criteria– FSP serves the same age group as Promenade and is a local agency. Promenade likes to make a tangible gift to complement what FSP is already doing in the community in making a difference in children’s lives.”

Promenade of Charlotte gives a grant to a local agency every few years through their board members’ nominations. Past grantees include Christ Episcopal Church and The Relatives.

This summer, every SLI at The Grove Presbyterian, one of Freedom School’s locations, received a tablet to help maintain a uniform system of positive reinforcement. Asael Salinas, a rising Junior at Duke University double majoring in Public Policy and International Comparative Studies is one of the 150 Servant Leader Interns (SLI) working at Freedom School.

Salinas says, “I use my tablet for attendance, classroom management through the app ClassDojo and to organize my days and weeks.” It’s an easy way for him to get his information for the day, which helps him plan ahead. During the core literacy time at Freedom School called Integrated Reading Curriculum, Salinas uses ClassDojo on the tablet to give out points to scholars who participate and throughout the day, he uses the tablet to reward scholars with good behavior such as staying on task and listening. 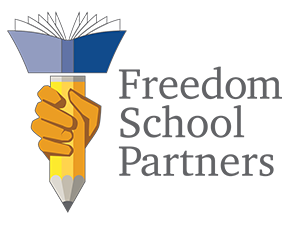